An Offer They Couldn't Refuse

We’ve all passed them on the boardwalks, the musty Old Time Photo shops, where customers line up in droves to have portraits taken in gangster, flapper, cowboy or pirate attire, against antiquated backdrops, holding timeworn props. Otherwise-respectable adults set their minivan keys and docksiders on meager benches in the dressing rooms, and slip into fishnet stockings or pin-striped suits, to pose on bar stools with money bags and Tommy Guns. Small children, whose parents fret over every non-organic element in their daily lunches, are posed in fringed and feathered headgear, holding empty whiskey bottles. Why? Because dress-up is fun and irony is funny.

That is, at least, what those who heartily enjoy the Old Time experience, believe.

Being an enthusiast, myself, I have, again and again, over the past five years, on our annual summer vacation, attempted to convince my closest chums to have a group photo taken at one of these beach-side establishments, only to be shot down on a yearly basis, for all kinds of reasons: I don’t want to wear clothes that other people wear; the whole thing is weird; I don’t feel like going there; I’d rather die, and so on. I can, however, be persistent, and pitched it to the BFF, yet again, as we sipped morning coffee on the deck.

“Come on. It’ll be hilarious. We can check it off the bucket list, and I’ll never mention it again,” I suggested.

“I don’t have a bucket list,” she answered, with eyes as level as laser beams, “I have a list of ridiculous things you’ve made me do throughout my life.” Disbelieving, I searched her face for a trace of jest, but she continued, “And if I had never done any of those things, my life would still be fulfilling.”

“But not as much fun,” I quickly interjected, entirely convinced that that was her next intended line.

“Maybe not. But still perfectly fine,” she replied steadily, with a smile. 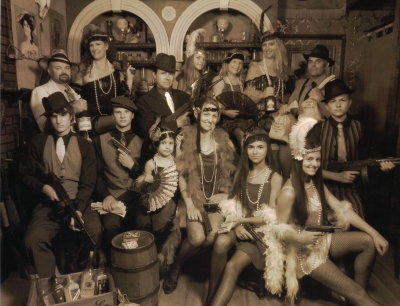 For a nanosecond she had me convinced, then I determined… Nope. Deep down, she absolutely wants to get an Old Time photo taken. They all do. Who wouldn’t?

As luck would have it, the only storm during our sunny, beach-weather week rolled in shortly after that conversation, and as 14 of us sat in the living room, 13 of whom were desperately trying to devise alternative ways to spend the afternoon, I made my case again, emphasizing the promise, “… and when it’s over, I will never ask again. Ever.”  The room fell silent with awe when the BFF’s husband, the toughest nut to crack on this case, piped up flatly and unexpectedly, “I’m in.” Eyes darted around the room at each other. If he was in, that meant we were all in.  After five years, the stars aligned; thus, with a complete lack of something better to do, we were on our way.

“You guys are going to love this!” I assured them, as our large lot piled into two minivans. Love is a funny word, though. It has a lot of variation, as I was reminded a bit later.

Being a drop-in business, there’s no time for dillydallying or lollygagging in the Old Time Photo studios, especially with a crew as gigantic as ours. Almost as soon as we set foot in the place, a photographer and her assistant sized us up, one by one, handing out costumes and accessories, lacing the backs of the dresses, and covering whatever didn’t fit with ties and feathered boas. Within minutes, all 14 of us were placed strategically around a saloon scene, answering the assistant, who requested our individual prop preferences with a repetitive, “Gun, bottle or money bags?”  Most chose guns, and aimed them at me.

At that moment, a moment when the joyfulness of a realized plan was overcome by deafening, awkward silence, it occurred to me for the very first time… I really don’t think they want to be here. Each of my beloved friends’ faces was marked with varying degrees of discomfort, awakening me to the reality that it was more than lackluster enthusiasm that kept them from doing this for five years – it was that they really, truly detested the notion of dressing up for an Old Time Photo. From behind the camera, the photographer instructed, “Nobody smile.” This was not a problem.

When the photo shoot ended, and our squished-up group dismounted the bar, and dispersed throughout the room, tugging wildly to remove red neckties and strings of white pearls, I told the BFFs, “Right before she took the picture, I realized that none of you were having fun.” They laughed in agreement. “Then why did you do it?” I asked.

“Because we love you. This was the one thing you wanted from us, for five years, and we love you.” Well, if that ain’t the cat’s pajamas.

When it was over, and everyone was in their own clothes, seated contentedly around a restaurant table, the smiles started cracking, partly because, as suspected, the experience made for an outstanding memory, and the finished product, itself, was worth a thousand words; moreover, perhaps, it was because they know I’m a woman of my word and as such, can never, ever ask them to endure it again.  Ever. That was an offer they couldn't refuse.