The Naughty, the Nice and the Boys 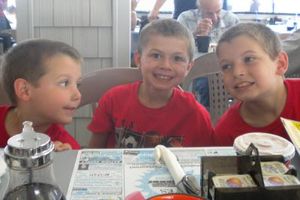 “Mommy,” my six-year-old son asked with genuine concern, as he looked around the room that was newly decorated for Christmas, “does anyone really get coal from Santa?” Remembering the story about my grand-uncle, who received coal the year he ditched the church’s May procession to feed the elephants that came to town with the circus, I replied, “Yes, kids get coal if they end up on the naughty list.”

He mulled the response quietly as he sat upside-down on the sofa. Eventually turning himself upright, he asked, “Is there a medium list?” After a moment of self-examination, he was obviously concerned about his status. Even though he is generally a very good boy, he is just that - a boy…and what interesting creatures those critters are.

Last month, my daughters and niece set up a spa in the bedroom, where they were painting each other’s nails and putting on make-up. When my son and nephews asked to play and were denied admission, they armed themselves with light sabers, busted the door open, took a doll hostage and started World War III. Afterwards, all three boys, with heads hanging low and makeshift holsters sagging off their waists, were lined up on the stairs, and interrogated about their actions, at which point they exclaimed, “We wanted to play with them, but they wouldn’t spa us!” Their tone spoke volumes, begging me to understand that injustice forced them into action.

I took the same three boys shoe shopping, and if the saleslady at Olly’s is reading, again, I apologize. Nephew One has an aversion to socks, and the odor that emanated when he removed his shoes was enough to knock a horse dead. Nephew Two took his sneakers for a test drive, running a lap as fast as he could around the store, then power-slid into the hard-wearing saleslady and said, “Yep. They’re good.” In the meantime, Sonny Boy occupied himself quietly by practicing his shoe-tying, lacing together a long strip of sample sneakers.

Now, as I peel tape off of 30 new trash bags that they used to insulate and side the swing-set clubhouse, I can’t help thinking that Santa might actually keep a medium list for boys with instincts that often overpower good intentions. Surely an old man, who still opts to jump down chimneys instead of using doors while delivering good cheer, can empathize with that.