Cow Appreciation Day 2015: Taking the Bull by the Horns

Before heading over to Chik-Fil-A, I made a detour to see if my niece and nephews wanted to tag along, while my 14-year-old daughter, who always asks me to swing by her cousins’ house, begged me to turn around in their driveway and leave, before anyone noticed we were there. I really don’t know what her problem was. At first I thought that maybe she had a little tiff with one of the cousins, which was highly unlikely to begin with, but when I realized that my 12-year-old son joined her in pleading me to back out of their driveway, I was sure it wasn’t that.

What odd behavior. What strange concerns were rolling around in their little teen and preteen heads? Were they afraid of being distracted by conversation, and wanted to focus on their food? Were they selfishly afraid that there was not enough chicken to go around if we brought more kids with us? I taught them better than that! Alas, the answer struck me as soon as my niece and nephews approached, with the same immediate expression of intense confusion and disgust. It was the head-to-toe cow costume that I was donning. They were all judging me.

For whatever reason, be it curiosity or fear, they got in the car anyway, and glanced sympathetically at my children, whose clothes were adorned with construction paper cow spots, stuck on with wads of electrical tape. My son had a photo of a cow plastered on the front of his beloved Nike shirt, and the preschooler was wearing a cow hat with ears, and had a little, paper tail taped to her backside.

“Listen, people. It’s Cow Appreciation Day. If we dress like cows, we get a free dinner. Share your spots.” Obediently, yet apologetically, my children removed a few of their taped-on cow spots, and stuck them to their speechless cousins. As we approached the parking lot, the kids worriedly reported, “Aunt Heather. Nobody else is dressed like a cow in there.”

“Yes, they are. You just can’t see them yet. Look! There’s a giant cow right there.”

“Mom, he works here. He’s the mascot. You’re just a crazy person in a cow suit.” 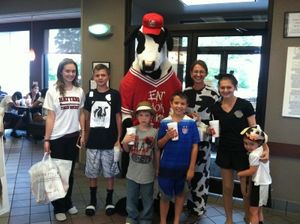 You know, if there’s one thing I can’t stand, it’s a party pooper. Ok, I understand all about adolescents and their heightened self-consciousness and sensitivity, but there comes a time when we have to cast aside all fears about what others may think, and focus on the goal. In this case, the reward was not a little, plastic whistle – we were talking about free Chik-Fil-A chicken sandwiches, waffle fries and lemonades all around. We were not dressed like fools – we were dressed like winners. Eyes on the prize, kids.

To the slight relief of the teens, there were, indeed, other driven individuals in an assortment of black and white costumes milling about inside the restaurant. As we waited in line, a man in a sharp-looking business suit stood between us and another cow family behind him. When I glanced in his direction, he shook his head shamefully, and sighed, “I didn’t know.” It’s alright, my friend… now you do. Now you do.

Watching the friendly cashier ring up our order of seven sandwiches, seven waffle fries, and seven lemonades, for a grand total of $0.00, I was overcome with a gloriously victorious feeling, and though I doubt they’ll admit it for years to come, I’m pretty sure I witnessed my herd crack a few smiles.

Were the children mortified? Marginally. But as they walked out of Chik-Fil-A, hiding behind their bags of food, dashing to the car to avoid being identified, they also carried with them the truth that the only way to achieve goals in this world is to push beyond insecurities, take the bull by the horns, and moo-ve it.