Exactly seventeen years ago, on a sunny, funny summer day, Sean and I got married. We kick-started this journey with a trip to Moorea, where we got a drumstick stuck in a coconut in an attempt to open it, ate pineapples for two meals a day, to avoid Tahitian cuisine, and went sharkfeeding on an outrigger canoe, thinking it must be safe, since we paid a guide to take us. The guide threw tuna into the ocean until we were surrounded by black-tip sharks, and unable to speak English, he pointed to them, as if to say, "You wanted to see them... there they are." *Ah, thank you. Let's go back now.* 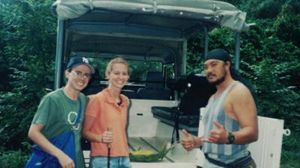 We jumped into a Jeep with a giant Polynesian maniac who zipped through muddy, hilly terrain in the pouring rain at about 6,000 mph, causing us to cling to the posts of the vehicle for dear life, as he climbed fearlessly to the tops of the hills at what seemed to be 90-degree angles. He used a machete to clear the way to a waterfall, where I jumped in, then jumped right back out when a giant eel, or some similarly slimy creature, slid across my legs. On another day of the trip, we rented a scooter, went off the path they told us to stay on, killed the scooter, then took a ride from a kindly, French-speaking stranger with a truck big enough to haul the dead scooter back to the rental facility, which was quite possibly the only establishment on the island, besides our hotel, that had a floor *and* a roof.

What made us think that we could fly halfway across the world to that tiny speck of a (quite primitive) island, and make it back home again? We had no sense in our heads... that was certainly a huge factor, which also played a role when we exchanged the rings, promising to build our futures together, without any real idea of what that meant. We were clueless then, and haven't gained all that much wisdom over the years, but from the start, we've had hope, love and a lot of laughter. Here's to many more senseless years, Hub! I love you.