Another One Bites the Dust

The knife, lathered in the peanut butter that I had been rinsing off as I loaded the dishwasher, fell out of my shaking hands and hit the bottom of the kitchen sink. Slowly, I turned and looked down at four pleading faces that moved closer and nearly pinned me to the cabinets as one child repeated the request, “Mommy, can we please take Kristen out to see the bunny?”

I’m a fair woman. I try to honor all reasonable requests. Sure, it was cold out, and we’d have to bundle everyone up to hike across the yard and stare at the rabbit in the hutch in the whipping January wind, but I would do it. If not for the fact that the stinking bunny had dropped dead as a doornail just before Christmas, I truly would have done it.

My heart was thumping wildly as I tried to play it cool and think up an outstanding reason why we had to stay inside for the next 40 minutes before Kristen’s mom came to pick her up. Spotting the box of treats that Sean brought home from his band rehearsal, I shouted, “Who wants a doughnut?” That trick bought me roughly 10 minutes, and as the temporarily distracted crew cheered and ran to the table, my brain raced to develop a stronger deterrent. 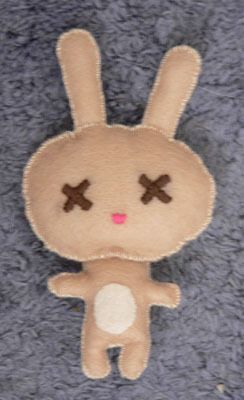 At one point in time, there were three rabbits. When the first one died, it was a traumatic event in the household. Tinkerbell was Juliet’s pet, but all three kids went berserk when she passed on to greener pastures, and we have since had to tearfully include her in bedtime prayers. A year or so later, when Aidan’s female rabbit, Jeff, went to nibble the big carrot in the sky, we brilliantly opted to tell them that she ran away. This prompted a slew of unexpected questions, mostly from a particularly discerning Ashley. “How did she get out?” I guess she must have pushed the top open. “How did she get the rock off of the top?” I don’t know – maybe she just pushed really hard until it fell off. “How did she put the rock back on before she left? Can she hop with a rock in her paws?” UGH! We have since been answering questions regarding Jeff’s departure, and the details have become ridiculously elaborate, and very difficult to keep track of. As of right now, Jeff is living with her husband and children in a posh shrub somewhere in the suburbs of Washington, D.C.

When Belle, the third and final bunny, died a couple weeks ago, the weather had just gotten very cold, and the kids were no longer running around all corners of the property. In wintertime, they voluntarily narrow the play area to the swing set and the driveway, where they ride bikes. When Sean discovered the dead bunny, Christmas was coming, and while we decided that telling them the truth was the better road to take, we put it off indefinitely, kind of hoping that they wouldn’t notice. When their friend, Kristen, came over for the first time yesterday, however, the kids were bubbling over with excitement to show her every nook and cranny of the house, including the bunny hutch.

Now this story will not work out too well, since there’s no resolution as of this morning. I managed to entertain the crew until Kristen was picked up. There was a close call as she was leaving because the kids made a break for it, speeding across the yard toward the hutch until Daisy, our enormous, insane, 1-year-old golden retriever, tried to kill them with love, which happens to be the first smart thing that dog has ever done.

With a birthday party to go to soon after their friend left, the kids were re-directed to the house, and the news has yet to be broken. I dread it, but it has to be done, and after a while they will be okay. We will not be buying any more bunnies, but I have had my eye on a frog for Juliet, since they've always been her favorite pet. After all this, however, it might be wise to procure a companion that is not as likely to croak the first day we get it.