I am the only chipper morning-person in this house, living with five night owls, which means I am completely out of sync with the rest of my family. Nearly every day, I spring out of bed in the last hours of darkness, cheerily greet the morning moon, grab my fluffy, pink robe, and immediately start buzzing around the house. I do some laundry and dishes, make the coffee, exercise or do whatever else strikes my fancy. No grogginess. No wishing to go back to bed. I’m as happy as a clam, until I encounter my husband and children, who possess an uncanny ability to flatten my enthusiasm with a single grunt. They sit upright with their eyes closed, and frown at me angrily. They snarl and bark when I ask questions, such as, “What are you looking forward to today?” or, “Do you want to hear a joke?” Sometimes it seems as though, even deep down, they really don’t want to dance when I put on Barry Manilow’s, Daybreak, at that hour. I don’t understand it.

My, how the tables turn in the evening, though. It seems to defy logic that they experience a surge of energy late in the day, almost at the exact time that I start slipping and sliding toward the crash and burn segment of the daily routine. They laugh noisily, jump around, enthusiastically share stories, and I want to cry, “For the love of all that’s good, WHY are you still awake?”

I try so hard to keep my eyes open to watch movies with them at night, but I usually can’t do it. It pains me to miss out, but it’s excruciating to stay awake when I feel so miserably exhausted. Last year, Sean and I were watching the Oscars, and The Grand Budapest Hotel was making a sweep of the awards. I commented, “We should’ve gone to see that.” He looked at me squarely, and remarked, “We did see it. At the theater. You fell asleep during the previews.” That’s right. I knew it sounded familiar.

For all nighttime events, I’m a terrible date, and a lousy party animal. Maybe that’s why I enjoy parades so much. At the crack of dawn, the streets are lined with my kind of people… people ready to dance on the sidewalks, wearing goofy hats, while the sun rises over the city.  The camaraderie is palpable, “We morning people really do know how to have a good time… before noon.”

Sunrise is, by far, the most hopeful time of day, and I never want to miss one, for just that reason.  Being a natural-born worry-wart means that the middle of the night brings me undistracted fears, who rub their hands together mischievously, ready to wreak havoc on what would be a peaceful slumber. Thanks to them, many nights are wrought with tossing and turning, as they flick my ears, tickle my feet and whisper a steady stream of exaggerated concerns in my ears.

Just before dawn, though, I am finally able to stifle the mangy miscreants, because something beautiful is on the horizon. Coffee? Yes, of course, it’s my favorite. I’ll take two, please. But there’s something even more glorious than the bean, and that’s the joy of witnessing the birth of a new day. Watching light seep incrementally through the darkness, waiting for the sun to appear, and finally enjoying the range of gorgeous colors splash across the sky is something that fills me up, and I want to share it, but I refrain, because that would be an unhealthy choice… at least, in this house.

On our most recent summer vacation, however, the crew surprised me. After a straight week of asking everyone the night before, who wanted to join me in my morning trek through the darkness, up the street to the beach, to find a front-row seat to my favorite show, and after being denied five times per night … for a whopping total of 35 consecutive “no”s… on our last morning at the shore, they all rolled out of bed to accompany me. There wasn’t a smiling face in the bunch as they trudged along the sidewalk in their pajamas, and I don’t think the little one could blink for five straight minutes as she sat motionless in her stroller, but it was monumental, and the gesture shone brightly. 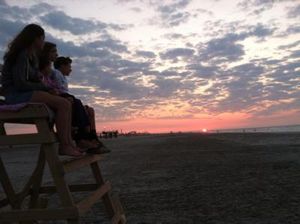 In a world of 24-hour, international news broadcasts, it can be hard to see the sunrise through the darkness, but hope remains, often in the mundane. On any given day, patrons hold the door for strangers at Wawa, someone makes a hilarious joke to provide comic relief at the perfect moment, people pick up items dropped by colleagues, teachers give high-fives, adult children accompany their aging parents to Acme and the hair salon, acquaintances send the assurance of thoughts and prayers over social media, cars brake for small animals (hopefully after checking the rearview mirror first)…the list of goodness goes on and on, and it is clear that the Light of the World is painting the sky with bold colors every day, even if we have to make an effort seek Him.

I'm thankful for all who have been a source of light in our lives this year, whether it was in person, through the computer, on the phone, or even in a memory that we share.

"What has come into being in him was life, and the life was the light of all people. The light shines in the darkness, and the darkness did not overcome it." -John 1:3-5