Ain't That a Kick in the Shins 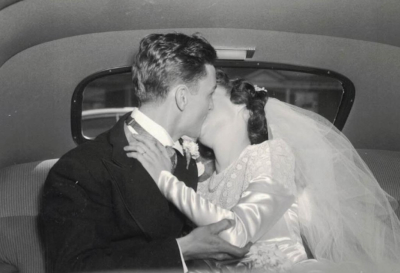 It’s hard to believe, especially as a child, that your grandparents were ever young. What’s even harder to envision is that they were ever in love, in the whistling-“That’s-Amore”, buying-boxes-of-chocolates sense. Sure, they held hands, to help each other to and from the car, and they stood together through every difficult circumstance that developed at different points in their long marriage, but the head-over-heels, fireworks, “in love” image isn’t something that’s easy to picture while observing their interaction as grandparents, shopping for a tablecloth.

I remember being with Nan and Pop as a 15-year-old at Clover, where we must have been stalled in the home goods section for quite a stretch. Pop had obviously had enough of tablecloths and other textiles, and was trailing behind, knowing better than to nag verbally, but using every trick in the book to express his agitation, and desire to go home. Finally, like a puppy who’s not allowed to go outside to play in the mud, he slumped down in a seat, about 20 feet from where we were standing, rested his head on his paws and sulked. Every so often, he turned his wrist upward to glance at the time. It drove her crazy that he wore his watch seemingly upside-down, on the underside of his wrist, for no particular reason, so Nan warned, “Jimmy, if you look at that watch one more time, I’m going to kick you in the shins.” Intrigued by the challenge, he perked up his ears, and with a daring expression, he looked her in the eyes, then flipped his arm around, and took the forbidden glance at his watch. His victory was short-lived. Much to his surprise, Nan immediately abandoned the cart, scurried over to him, and gave him a swift kick in the leg.

With a mix of amusement and bewilderment, he exclaimed for all of Clover to hear, “She kicked me!” Then the two of them burst into laughter, and he conceded, “Alright, Old Girl, you’re the boss.” She shot him a familiar glance, which quipped, “Tell me something I don’t know.”

Being so familiar with that stage of their relationship, I loved hearing stories about the beginning, when he was trying to sweep her off her feet. They met shortly after the war ended 1945, on a work truck, which finally, with the help of Google Images, I am able to accurately envision. (With confusion, I would always ask Nan, “Was it a bus?” and she’d say, “No. It was a plain, old truck that picked everyone up and dropped them off.”)

She was a class act, who graduated high school through an accelerated program, which enabled her to get a job to earn an income during “war times”, as she later called them. She was fairly shy and quiet in public, despite her warm, charismatic personality, and he was, by all means, a loving, caring, people person, and an unrivaled, animated storyteller. Their greatest commonality, from my perspective, was a sense of humor, so I can’t help guessing that chance seated them next to each other on that truck, and wit took care of the rest.

Pop often reminisced about those summer days when he worked a few floors above Nan at Sharp and Dohme in Philadelphia. To show her how just how wonderful he thought she was, he filled a basket with ice cream, tied a rope to the handle, and lowered it out the window, so that she could catch it, and bring it to her desk for a treat. I never heard the full report, but I imagine that sparked a little envy among the ladies working around her, and though it was not in her character to gloat, I can picture her being impressed with that cute boy upstairs, and wearing the hint of a grin on her face.

They were married on February 5, 1949. Over the years, their expression of love somehow changed from baskets of ice cream to fights in Clover, but it took until I was several years into my own marriage to understand that it was the same thing. She was still his best girl, and the fact that he endearingly referred to her as, Old Girl, the way he did, only meant that he’d loved her more than anyone for a very long time.

Happy anniversary to the two best people ever to fall in love and get married. xo